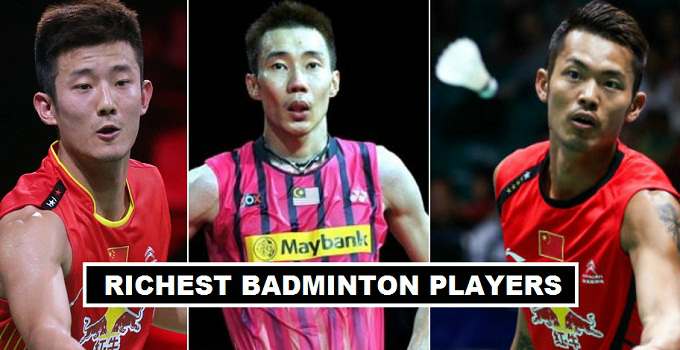 Badminton is among the top professional sports it become famous in Asia and European region in past 10 years. The cash prizes for the winning players and players who made to the finals become extra. Its not as big as tennis players earn during their career. A sports magazine published a report in which they discuss most earning badminton players in the world. Lee Chong Wei is currently world richest badminton player, he made history by winning championship worldwide.

Lee Chong WEI : Career Earnings ($30 Million) :
Lee Chong Wei is among the best players in Badminton. He is a three time silver medalist in Olympic games (2008,2012,2014). He is one of the most marketable athlete in Malaysia and signed big endorsement deals that made him most richest badminton player in the world.

Lin Dan : Career Earnings ($10 Million) :
Lin Dan one of the greatest Chinese badminton players. He is a two time gold medalist in Olympics he won first gold medal in 2008 and second in 2012 after defeating Lee Chong Wei in the final. He sets record become the only player to retain the Olympic title.

Peter Gade : Career Earnings ($5.5 Million) :
Peter Gade is retired from Badminton after playing his last Olympics in 2012. He become the IBF World player of the year in 1998 after winning performances. He is five time European champion in badminton. In 2001, he finished runner-up in World Championships in Seville, Spain.

Lin Dan second most earning professional badminton player. Not only prize money increase their earning they also get big endorsement deals when they won big badminton tournament and gold medal in (Olympics, Commonwealth Games and Asian Games). Chen Long become the top player in the world rankings of badminton.